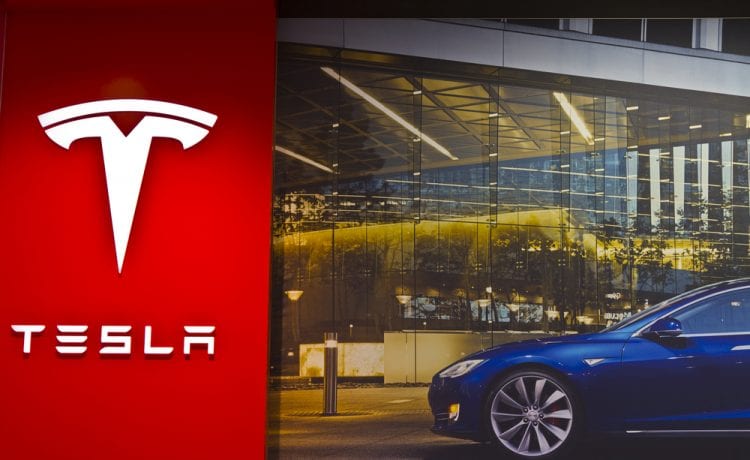 Shares of Tesla jumped 11 percent, while Apple, Salesforce, Microsoft, Amazon and Facebook were also up, a day after their declines pushed the Nasdaq into correction territory

Tesla shares have led a rebound in tech stocks, just one day after stock in the electric car maker suffered its biggest ever drop, wiping $16.3 billion from the net worth of CEO Elon Musk.

Shares of Tesla jumped 11 percent for the day on Wednesday, after shedding about a fifth of their value in the previous session following the company’s surprise exclusion from the S&P 500.

Apple, Salesforce and Microsoft, which have borne the brunt of the tech rout, were also up, and among the top boosts to the blue-chip Dow.

Amazon and Facebook also climbed, a day after their declines pushed the tech-heavy Nasdaq into correction territory as it ended 10 percent below its September 2 closing high.

The tech rally helped boost S&P 500 by 2 percent. It was the best day in three months for the index, which recovered a little more than a quarter of its losses from the prior three days.

Musk’s drop in net worth on Tuesday was the largest single-day wipe-out in the history of Bloomberg’s Billionaire’s Index, and came amid a rout in US technology stocks that started at the end of last week but continued after Labor Day.

News of a partnership between competitors Nikola Corp. and General Motors Co. compounded Tesla’s woes, deepening the sell-off, and seeing the electric car maker’s stock dip below $336 from $500 a few days ago.

The enigmatic entrepreneur, 49, was worth $82.2 billion at the close of trading on Tuesday, making him the sixth richest person in the world after falling behind Bernard Arnault in fourth and Warren Buffett in fifth.

Tesla’s Chief Executive’s loss also means he is no longer in the exclusive centibillionaire club, made up of those with a net worth of over $100 billion.

All three centibillionaires, who have seen large gains in recent months during the coronavirus pandemic, also saw drops in their net worth in the intensifying technology rout.

But it was Elon Musk and Tesla who took the biggest hit, with the firm’s shares having their worst day ever, closing down 21.1 per cent at $330.21 and taking losses since last week’s record high to 33 per cent.

The car maker is now valued at $308 billion, compared with more than $420 billion earlier this month.

Other leading tech companies also saw drops, with Apple losing 6.7 per cent, Facebook down 4.1 per cent, Amazon down 4.4 per cent, Netflix down 1.8 per cent, and Google’s parent company Alphabet down 3.7 per cent.

The Nasdaq – seen as the bellwether for the US stock market – fell into correction territory after dropping 10 per cent from its record close last week, and down 4.1 per cent on Tuesday night at 10,847.69 in New York.

It marked a continuation of a sell-off that gripped the stock market late last week over concerns that a tech rally – that has seen nine months of record highs in the sector – had pushed valuations to unjustifiable values.

Despite the drop, the tech index is still up 20.9 per cent since January.

Since governments shut down economies earlier in the year due to the pandemic, American tech stocks have seen huge gains, pinned on the belief that tech firms would benefit from changes in spending habits and more online use during lockdown.

However, investors are showing concerns over the fragility of the gains that were reportedly fuelled by Japanese technology group Softbank by buying derivatives worth between $30 billion and $50 billion, according to The Times.

Traders have warned that this has left Softbank and the broader market exposed if investors liquidate their positions, suggesting they have bought billions of dollars’ worth of tech stocks to hedge against Softbank’s options.

Market Makers could be forced to sell if prices fall further, but analysts predict that the drop-off last week and on Tuesday could prove to be a correction rather than a more serious sell-off.

Please remember that investments of any type may rise or fall and past performance does not guarantee future performance in respect of income or capital growth; you may not get back the amount you invested.
Richard StanleySeptember 10, 2020