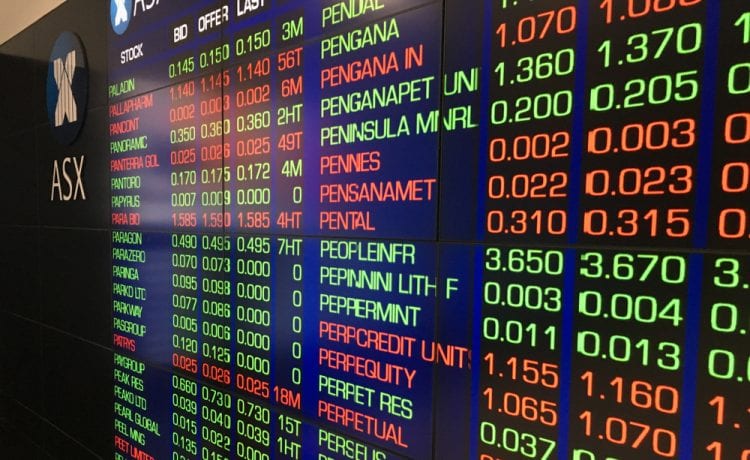 The Australian share market has closed in the red after initially opening higher, with healthcare and utilities stocks dragging.

The Australian dollar fell to around 69.9 US cents by 4:55pm AEST, after Bureau of Statistics figures showed the unemployment rate had increased to 7.4 per cent in June.

US stocks ended higher after promising early data for a potential COVID-19 vaccine and a strong quarterly report from Goldman Sachs.

Goldman Sachs rose 1.4 per cent after it said its trading revenue doubled in the second quarter, driven by big swings in stock and bond markets since March.

The Nasdaq Composite climbed 0.6 per cent to 10,550, with rises capped by Amazon, Netflix and Microsoft, which slipped from their recent record highs.

Confidence was also boosted as the Federal Reserve’s Beige Book survey showed an increase in economic activity for US businesses in early July as states eased restrictions to contain the coronavirus pandemic.

However, Philadelphia Federal Reserve Bank President Patrick Harker told a webinar the US had failed to control the virus and there remained a high level of uncertainty over the impact on the US economy as infections continued to rise.

He predicted the US economy would shrink by 6 per cent in 2020, with real GDP growth slumping by one-fifth in the first half of the year, followed by growth of 13 per cent in the second half.

Brent crude oil rose 1.7 per cent to $US43.62 a barrel because of a sharp drop in US stockpiles.

Spot gold rose modestly overnight and steadied at $US1,811 an ounce.

US Secretary of State Mike Pompeo says the US will impose visa restrictions on Chinese firms such as Huawei, accusing them of facilitating human-rights abuses.

Mr Pompeo said telecommunications companies around the world were on notice that if they did business with Huawei, “they are doing business with human-rights abusers”.

The Secretary of State told a media conference the State Department would “impose visa restrictions on certain employees of Chinese technology companies like Huawei that provide material support to regimes engaging in human-rights violations and abuses globally”.

Earlier this week, the UK said Huawei equipment would be stripped from Britain’s 5G network by the end of 2027.

American Airlines is the latest carrier to warn staff about potential job losses as the coronavirus shuts down the global travel industry.

The airline is sending 25,000 notices of potential stand-downs to frontline workers, around one-fifth of its workforce.

It has also encouraged employees to take buyouts and early retirement packages so it can reduce the number of forced layoffs.

US airlines are not allowed to cut jobs or pay until the start of October under conditions imposed to qualify for $US25 billion in federal payroll support.