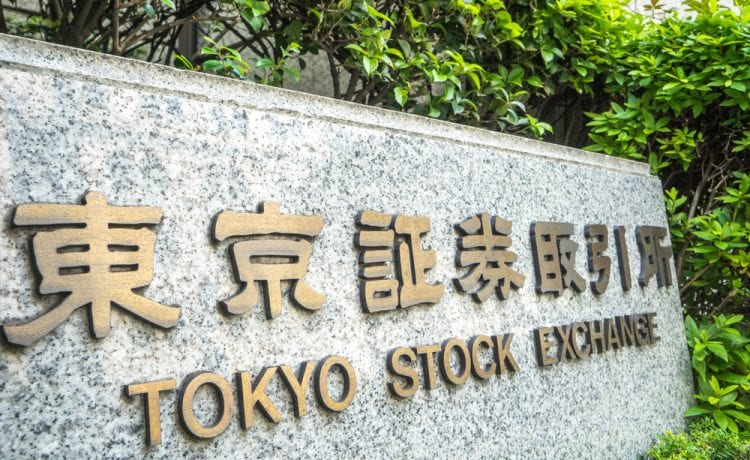 Stock markets were mixed Wednesday as some bourses paused their recent gains, but London and Tokyo rose on takeover news regarding Japanese industrial giant Toshiba.

Toshiba confirmed receipt of a takeover offer from CVC Capital Partners, jolting shares of the Japanese tech company higher and lifting some other companies on speculation over more deals.

Major Wall Street indices hovered near the flat-line for most of the session, but the S&P 500 eked out a fresh record.

The minutes of last month’s Fed policy meeting were “so much in line with expectation that it didn’t really affect the market too much,” said Tom Cahill of Ventura Wealth management, adding that investors are looking ahead to earnings season later this month.

The market is waiting for earnings announcements to see if corporations can lift expectations or raise guidance, Cahill said.

The potential Toshiba takeover by CVC, a British private equity fund, is “likely to prompt speculation about which companies could be next to fall prey to the wave of cash private equity firms have built up in recent years,” said AJ Bell financial analyst Danni Hewson.

Tokyo finished only moderately higher, but Toshiba stock surged 18 percent after it confirmed it had received the CVC buyout offer.

The Nikkei newspaper said CVC Capital Partners was considering a 30 percent premium over the industrial group’s share price on Tuesday.

Toshiba said it would “request detailed information and carefully discuss” the offer.

The proposal would take Toshiba private, with delisting intended to produce faster decision-making by Toshiba’s management, which has clashed with shareholders recently, reports said.

Please remember that investments of any type may rise or fall and past performance does not guarantee future performance in respect of income or capital growth; you may not get back the amount you invested.
Richard StanleyApril 8, 2021