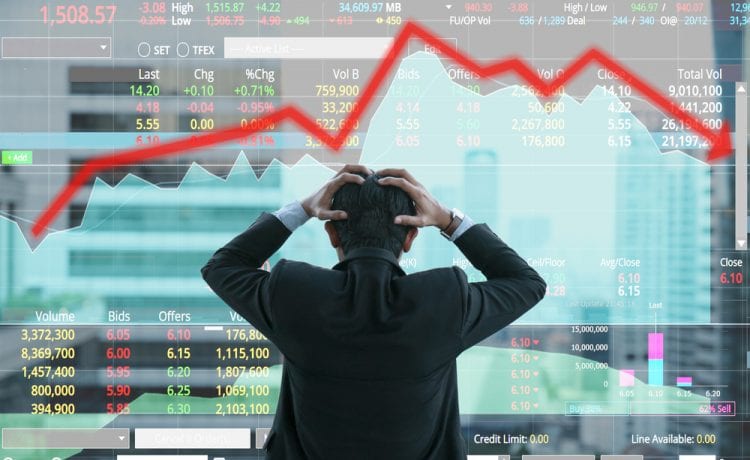 U.S. stocks ended Thursday sharply, with technology giants Apple and Microsoft at the vanguard of a selloff in large-capitalization stocks.

The tech duo’s decline accounted for more than half of the Dow’s losses, with investors parsing weak data on employment and growing concerns that another Congressional financial aid package for businesses and pandemic-stricken households may be held up by political wrangling.

The Russell 2000, which tracks small-cap companies, finished the session virtually unchanged at 1,490.20.

Stocks finished sharply lower Thursday, but the overall uptrend in the market appeared to remain intact as investors attempted to shift ownership out of some of the behemoths of tech and e-commerce into areas including small-capitalization stocks.

Microsoft wrapped up a record-breaking year Wednesday by announcing record quarterly revenue, but shares fell 4.4% Thursday, while Apple’s stock declined 4.7%. Technology shares represent 27% of the weighting of the broad-market S&P 500, therefore declines in those names can drag the overall market lower.

The Labor Department data showed 1.42 million Americans filed for first-time benefits, a rise of 109,000 and the first rise of those seeking benefits since late March.

The weekly employment report has become one of the key measures of the state of the COVID-19 pandemic that has been resurgent in many U.S. states recently, forcing the reimposition of restrictions to curtail the spread of the deadly illness.

Investors have been closely following negotiations by lawmakers over further fiscal stimulus. Senate Republicans and the White House struck an agreement on a $1 trillion coronavirus relief package, as a $600 weekly supplement to unemployment benefits is set to expire at the end of this month. The proposal sets the stage for further talks between Senate Republicans and Democrats, who have coalesced around a $3.5 trillion bill that was passed in the House in May, but analysts think negotiations will remain tense.

Market participants also parsed a barrage of earnings, including a trio of components of the Dow: Travelers Cos. and Dow Inc. A report from Intel was expected after Thursday’s close of regular trade.

Those quarterly updates come after electric-vehicle maker Tesla produced upbeat results, which featured its fourth consecutive profit thanks to more than $400 million in electric-vehicle tax credits, paving the way for the popular company to join the S&P 500.

Meanwhile, investors have been gauging developments between the U.S. and China, with Beijing vowing to close the U.S. consulate in the southwestern city of Chengdu, according to the South China Morning Post. The move comes after the U.S. ordered the closure of a Chinese consulate in Houston, citing fraud and espionage, highlighting rising tensions between the global superpowers.

In coronavirus news, the U.S. now has 3.9 million cases and 143,000 deaths, according to data aggregated by Johns Hopkins University.

A “trifecta” of factors — fiscal stimulus, encouraging news on the prospect of a vaccine against COVID-19, and better-than-expected economic news — helped lubricate the markets earlier in the pandemic period, said Michael Stritch, chief investment officer at BMO Wealth Management.

But more recently, Stritch said in an interview, “the virus has reasserted itself. Our view had always been that we’d have a wavy kind of recovery. And yes, we do need more on the fiscal side now. From the market’s perspective, it’s a push and pull where bad economic data may light a bit of a fire under Congress to act more quickly.”

Like many other observers, Stritch sees markets likely to remain “aggressively flat” for the foreseeable future, until there’s more clarity on a treatment.

A report on leading U.S. economic indicators rose in June but signalled the economy was likely to remain in recession territory.

In Europe trading was muted, with the Stoxx 600 Europe index finishing fractionally higher, while the U.K.’s FTSE closing with a slight 0.1% gain.

Gold futures climbed Thursday to settle less than $2 an ounce below their highest settlement on record on the New York Mercantile Exchange at $1,897.70 an ounce, up 1.3%. The most-active gold futures settlement record is $1,891.90 from Aug. 22, 2011, based on records going back to November 1984, according to Dow Jones Market Data.

September futures for the U.S. crude benchmark turned higher, up 0.3% to $42.04 a barrel despite concerns about rising inventories.

The 10-year Treasury note yield fell 1.3 basis points to 0.582%, around its lowest levels since April 21 after the jobless claims report was released. Yields move in the opposite direction of prices.

In currency markets, the dollar fell 0.4% against its six major rivals, marking its lowest level in about two years, as gauged by the ICE U.S. dollar index.